Microdialysis is well established as a clinical research tool in neurointensive care, tissue/organ transplantations and other ICUs, where there is a need for continuous monitoring of energy and metabolic states, and other biomarkers of local chemistry in

In addition, clinical microdialysis can be used in other organs including skin, muscle, adipose tissue to measure the effects of drugs or physical activity on local tissue chemistry. In partnership with Clinical Trial Consultants in Uppsala, Pronexus can offer clinical microdialysis studies designed for microdosing via the microdialysis catheters or phase I trials to evaluate the distribution of the candidate drug in other body compartments.

Microdialysis is a minimally invasive technique allowing in vivo sampling of molecules transported into, or generated within the extracellular space of principally any tissue or organ in the body and also for sampling the body fluids such as blood or CSF. Microdialysis in combination with a suitable detection technique allows monitoring the time-dependent changes in tissue chemistry, for example neurotransmitter release and reuptake, drug delivery or energy metabolism in a particular brain area. The unsurpassed feature of in vivo microdialysis is its capability to provide information on basal, non-stimulated levels of extracellular neurotransmitters, as well as, on pharmacologically or physiologically stimulated release. This offers a unique opportunity to examine the role of various receptor subtypes in tonic and phasic regulation of neurotransmitter release and metabolism in brain structures neuroanatomically relevant to disease pathology.

Microdialysis technique provides the most comprehensive information on dynamic changes of molecules involved in intercellular communication and metabolism at an integrative (whole body) level, preserving the overall physiological and behavioral functions.

Several independent techniques have demonstrated that the molecular movement within the interstitial fluid (ISF) is driven predominantly by diffusion. In an analogous way, the driving force of microdialysis sampling is the diffusion of molecules across the concentration gradients existing between the two compartments separated by the membrane: the tissue/ISF compartment and the perfusion fluid inside the probe as the second compartment.  Thus, the molecules can move in both directions, which allows simultaneous recovery of endogenous compounds released into the brain microenvironment and at the same time, drugs can be delivered locally through the probe into the sampled area.

Microdialysis can be used for monitoring the kinetics of drug distribution and elimination in different organs, which is of particular interest for brain studies since it allows evaluating the ability of drugs to penetrate through the blood-brain barrier. 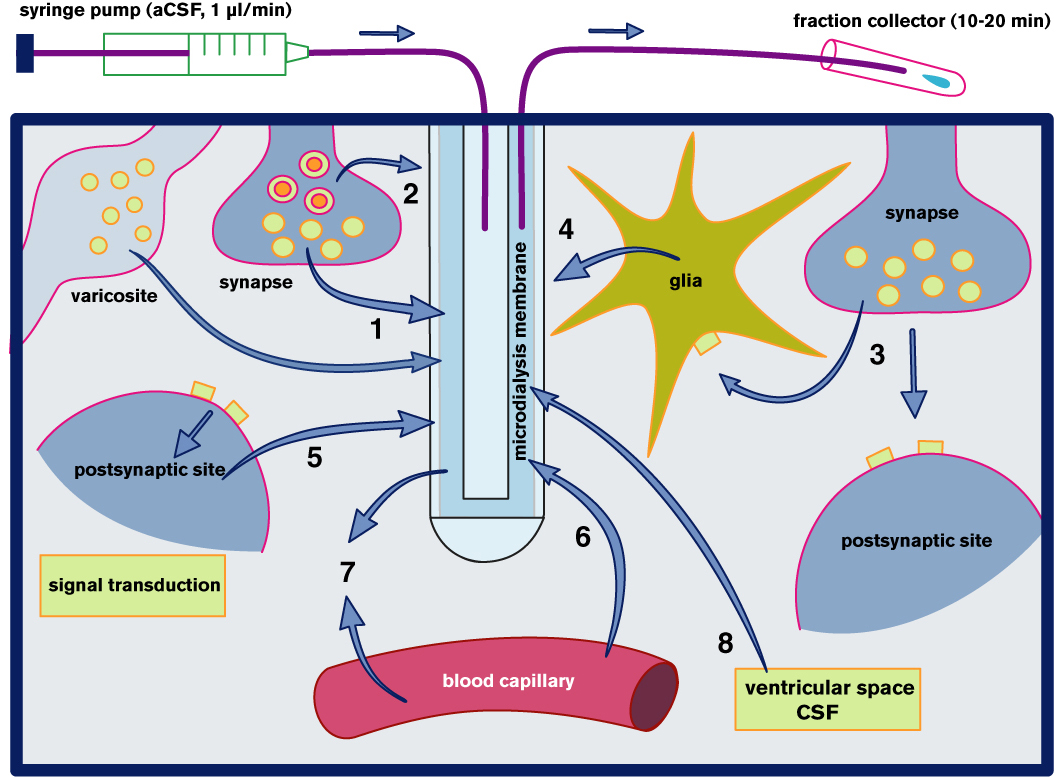 The principle of microdialysis sampling and the origin of molecules released into the brain microenvironment. The molecular movement of substances present in the interstitial fluid is driven predominantly by diffusion. Depending on the concentration gradients across the membrane of the microdialysis probe, the molecules can move in both directions, which allows simultaneous recovery of endogenous compounds and at the same time, drugs can be added to the perfusion medium and delivered locally into the same brain structure.

The most interesting and thoroughly studied molecules are (depicted by numbers): 1,2,3 - neurotransmitters, neuromodulators and neuropeptides; 3,4 - the neuron-glia interactions, glutamate and GABA, large molecules such as interleukins and trophic factors; 5 - second messengers cAMP, cGMP or arachidonic acid metabolites; 6 - molecules transported from blood capillaries - glucose, nutrients, drugs; 7 - neuro-vascular communication - NO; 8 - molecules transported from or into the CSF.

The first application of dialysis principle for sampling the brain microenvironment was described by Bito at collaborators in 1966. The Mongrel dogs were implanted with sterile dialysis sacs (8-12 mm long, flat width 9 mm, filled with 6% dextran in saline) into the cortex and subcutaneously in the neck. Ten weeks later, the content of the sacs was analyzed for amino acids and ions and compared to the concentrations in plasma and CSF. For most of the amino acids, they found a concentration gradient of the following order: blood plasma > ECF > CSF. Bito noted that the fluid in the brain sacs did not represent a dialysate from either the blood or CSF, which led to the conclusion that the brain extracellular space must represent a third compartment, supporting the idea of carrier-mediated transport system for amino acids. However, the use of dialysis sacs represented a static approach, providing only one dialysis sample per animal.

A possibility of continuous perfusion of dialysis bags in order to measure time-course of infused and recovered compounds was explored by Delgado and co-workers at the beginning of 1970s. These authors reported (Delgado et al 1972) a construction of a ”dialytrode” for monkeys, which was basically a push-pull cannula with a small (5 x 1 mm) polysulfone membrane bag glued on its tip. The authors described some conceptual experiments, derived from the established protocols for push-pull experiments: infusing a compounds or labeled precursors into the brain and correlating these effects to brain electrical activity or to a degree of newly synthesized labeled compounds and sampling and subsequent analysis of endogenous compounds such as amino acids. However, the dialysis method described by Delgado failed to reproduce the data obtained earlier with push-pull ”chemitrodes” (Roth et al 1969), for example there was no detectable dopamine found in the perfusates after pre-labeling the surrounding tissue with 14C L-DOPA.

It was Ungerstedt and Pycock (1974) who finally succeeded to measure amphetamine-induced release of dopamine-like radioactivity after local pre-labeling of brain tissue with tritiated dopamine perfused through a hollow fiber dialysis probe implanted into the rat striatum. A rapid advance in development of highly sensitive HPLC analytical techniques and technologies of manufacturing small-bore dialysis tubing during the coming years accelerated the research on applications of single fiber dialysis - microdialysis - in neurobiology, pharmacology and physiology from animals (Ungerstedt et al 1982; Hamberger et al 1982; Ungerstedt 1984) to humans (Meyerson et al 1990; Hillered et al 1990; Ungerstedt 1991). Several books on in vivo monitoring include chapters on microdialysis, and a monograph ”Microdialysis in the Neurosciences” was edited by Robinson and Justice in 1991. A series of meetings with emphasis on electrochemical detection and in vivo methods in neuropharmacology was initiated by Prof. C. Marsden in 1982. Gradually, the meetings grew into a form of medium-sized international conferences on "Monitoring Molecules in Neuroscience", which are organized every second year. The proceedings of the conferences can provide a fast overview on major applications areas and technological advancements of in vivo monitoring techniques.

The first successful demonstration of feasibility to use brain dialysis for measuring neurotransmitter release in vivo. Measuring amphetamine-induced release of DA-like radioactivity after local pre-labeling of the rat striatum with tritiated DA.

Meyerson BA, Linderoth B, Karlsson H, Ungerstedt U (1990) Microdialysis in the human brain: extracellular measurements in the thalamus of parkinsonian patients. Life Sci, 46:301-308.